The MAC address of a reserved management interface does not change to a VMAC address; it keeps its original MAC address.

A MAC address conflict can occur when two clusters are operating on the same network using the same group ID (see Diagnosing packet loss). It is recommended that each cluster in the same network and broadcast domain uses a unique group ID.

The following settings can be configured.

If you disable sending gratuitous ARP packets, it is recommended to enable the link-failed-signal setting. The linked-fail-signal alerts the connected switches of a failed link, which triggers them to react immediately to the changes.

A VMAC address is determined based on following formula:

The <group-prefix> is determined by the following set of group IDs:

The <group-id_hex> is determined by the group ID % 256, converted to hexadecimal. For example:

The following table compares the VMAC addresses for interfaces with an unchanged HA group ID (0) with VDOMs not enabled and interfaces when the group ID is changed to 34:

To change the current hardware address on a FortiGate not operating in HA:

In an operating cluster, the current hardware address of each cluster device interface is changed to the HA virtual MAC address by the FGCP. The macaddr option is not available for a functioning cluster.

To display MAC addresses on a FortiGate operating in HA:

A network can experience packet loss when two FortiGate HA clusters are deployed in the same broadcast domain due to MAC address conflicts. You can resolve the MAC address conflict by changing the HA group ID (or cluster ID) configuration of the two clusters. 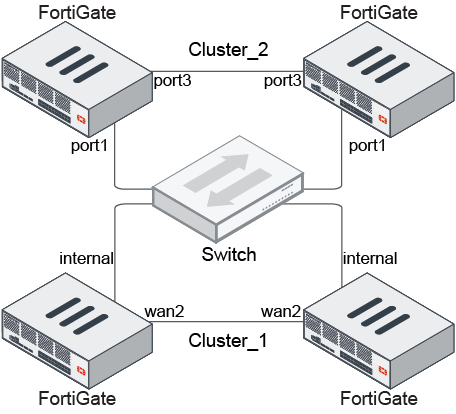 You can diagnose packet loss by pinging from one cluster to the other, or by pinging both of the clusters from a device within the broadcast domain.

To check for a MAC address conflict in a HA cluster:

The MAC address of a reserved management interface does not change to a VMAC address; it keeps its original MAC address.